I grew up in a family of pioneering women, in a state, which was ranked as the 49th lowest performing state for women in the U.S. (out of 50). Less than 24 percent of women from Louisiana go on to earn a bachelor’s degree or higher[1] and at 12.5% we have the lowest percentage of women in our state legislature. But despite these indicators, there’s my maternal grandmother who worked as a nurse with her BSN, my paternal grandmother who has her Ph.D., and my mom who ran her own business. I recently learned that my great grandmother was the first person in her family to go to college and later abruptly left her small-town one school district as a teacher when she found out she wasn’t being paid equal to men. It was two women, Ms. Kelsey, my high school English teacher and Dr. Vanessa Bouche, one of my college professors who inspired me work internationally. I even chose my college major because of a woman, Senator Landrieu, who through a chance meeting when I was 8 years old ignited my interest in politics. I was lucky, despite coming from a location where statistically most women don’t graduate from college, for my family it was a priority and I didn’t face obstacles to receiving an education.

Before coming to India, I had only vaguely heard of International Women’s Day. However, upon the first March 8th I spent here, I realized that it was quite the celebration. Here, the women who inspire me most are the ones who may seem ordinary to some but are revolutionary in their families and communities. There’s my coworker, Shalet, who was the first person in her family to graduate from college and became a senior reporter at The New Indian Express before joining the NGO sector. Kalyani*, one of our students who was married at age 11 and has joined our center at age 30 in hopes of taking up her first job. Kavitha*, one of our interns, who despite familial pressures to not work and get married, worked at a large software company and is now pursuing her MBA.

In honor of this International Women’s Day, I was privileged to participate in a “roadshow” or march organized by one of our skills training centers to spread awareness about education women and about our program to develop skills and employ young adults. Carrying a loudspeaker playing Kannada tunes and proclaiming messages of equal education for women, we traversed the neighborhood, distributed roses and received quite a few smiles and well wishes in return. One women’s rights enthusiast we met, Mr. Leslie proclaimed, “Women are the best part of the country, if they are not coming forward, than the country will go backwards. You have to give full respect to women; they are the ones who brought people into the world. That’s the main thing!” Throughout my life and across the world, I have been fortunate to interact with numerous inspirational women and also men who champion the cause.

To see our Women’s Day roadshow in action, watch the video below:

[1] “STATUS OF WOMEN IN THE STATES” Institute For Women’s Policy Research (2015) Web. https://statusofwomendata.org/explore-the-data/state-data/louisiana/

The blog was first published in http://aif.org/2017/03/women-with-a-vision-celebrating-international-womens-day-2017/

“If our hopes of building a better and safer world are to become more than wishful thinking, we will need the engagement of volunteers more than ever”– Kofi Annan 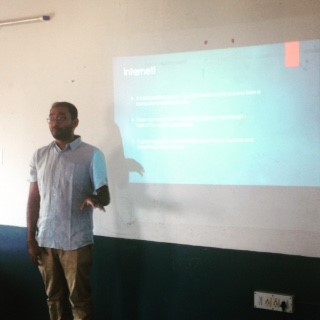 Kshitij Agarwal is a busy professional working with Intel but his commitment towards a good cause made him a volunteer. To help the students of Pratishtha, the skill development training centre of Reaching Hand, he volunteered to lead a workshop called “ Effective Internet Search” on March 18, 2017.

The sessions covered tips for Google searching, identifying fake information on the internet and utilizing online tools for daily life such as booking bus and train tickets.

He also showed the students how to edit a ‘Wikipedia’ page and asked not to trust everything they read online. In order to verify information, he told students to check multiple sources and see if they match.

His power point presentation showed live Google searches to refine results and help students find the information they need online. Kshitij made sure of the students’ involvement by asking them to do several tasks online especially, asking them to book a train or bus to the destination of their choice and consult multiple websites to find the fastest and cheapest option. This was done using tablets and students’ smartphones.

The students remarked that the workshop was of immense help as they have now learned to check multiple sources online.

When you dare to dream, the goal gets clearer and when you take the first step, however tiny it is, your journey towards it has indeed, flagged off. No doubt, the journey can be tedious and it is no different for Shasikala either.

This twenty-two-year-old wants to be an IAS officer. But she is not in a situation to dive deep into it, right away. For the responsibility of running her family consisting of father, mother, a brother and a sister is solely on her father’s shoulders. Her further studies would aggravate her father’s responsibilities. Hence, her first priority was to get herself a job.

Though a BBA graduate, she felt the need to join a skill development centre like Pratishtha to learn new skills and computers and make her employable. In no time, an enthusiastic Shashikala quickly grabbed everyone’s attention not only by becoming the top student but also by helping her classmates to succeed.

When a vacancy was noted in one of the centres, Pratishthta was quick enough to recruit her as a trainer. Shashikala indeed has taken the first step towards her goal. She feels proud to have become a trainer and believes she will bring further success to Pratishtha, while also building her own career.  “ Besides, my income would lessen the burden of my father. I can support the education of my brother and sister,” she says with a glint in her eyes.

Now, as a trainer, she is enjoying teaching and recently completed four-day training at Quest Alliance, the NGO partnering with Pratishtha. She liked the retail course and English the most.

With all the good things happening to her, it is equally important to note that Shashikala’s new earnings have allowed her to become independent, as she no longer has to rely on others for her sustenance. 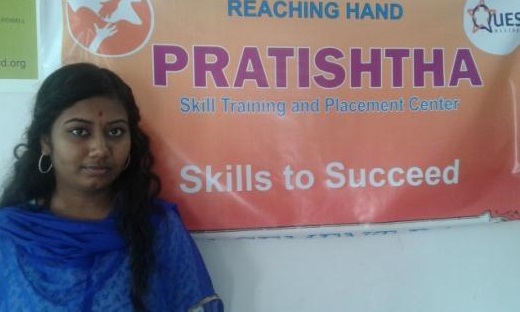 Meghna currently works as a Custom Relation Officer at Airtel. She earns Rs 20,000 a month plus incentives. But a year ago, her story was a bit different. Though a graduate, she was working at KFC for a salary of  ₹8000 per month.

Her life changed  for the better after her three month course in Pratishta centrehttp://reachinghand.org/project/pratishtha/  about which she came to know from one of her friends.

Originally from Kolar, 20 year old Meghana grew up in Bangalore under the care of her grandparents. Her parents were living in Kolar. Following her BA graduation, she began a job at KFC. But she wanted to achieve more in life and knew that it could be possible only if she hones her communication skills, especially English. Her search for a good skill training centre landed her in Pratishta.

PRATISHTHA (meaning Prestige) is a programme run by Reaching Hand that supports vulnerable youths, especially young women from disadvantaged families/communities to realize their dreams by equipping and acquiring employability skills with life skills, which not only helps them to access decent employment but also makes them representatives of a gender just society.

On her performance, her trainer testified “ Meghna’s commitment was apparent. Every day, she had to take two different buses to reach the center, yet she was always on time. She most enjoyed Customer Interaction and English classes and believes those classes helped her to procure the current job at Airtel.”

Meghna says “ My father is the sole bread winner of the family. He is a labourer.  As my salary doubled, I am now able to support my decently.”

Meghna  is not ready to end her perseverance and is saving for her future for she wanted to pursue MBA, which she believes will help her move up in her company and accomplish her goal of working at a higher level in administration.

To know more about Pratishta, please log on tohttp://reachinghand.org/project/pratishtha/